Image Of The Month - November 99 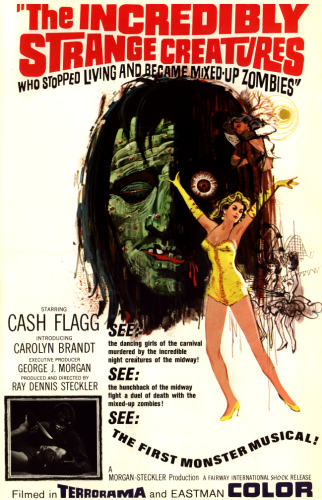 Incredibly Strange Creatures Who Stopped Living and Made Up Long Titles

Here's one of the posters from "the first monster musical".  Ray Dennis Steckler showed up at the Las Vegas Grind weekend to play some of his flicks, sign autographs, sell merchandise, etc.  My favorite RDS flick is still Rat Pfink A Boo Boo, but it was fun to see ISC on a big screen in Vegas.   Fortunately some of the "musical" sequences were edited a bit short in this version because they go on forever in the other version I saw, but it's still fun to see the hooded Cash Flagg on his spiral-induced rampage.  How many movies have had people getting hypnotized into doing all kinds of crazy things just because they looked at a spinning spiral?