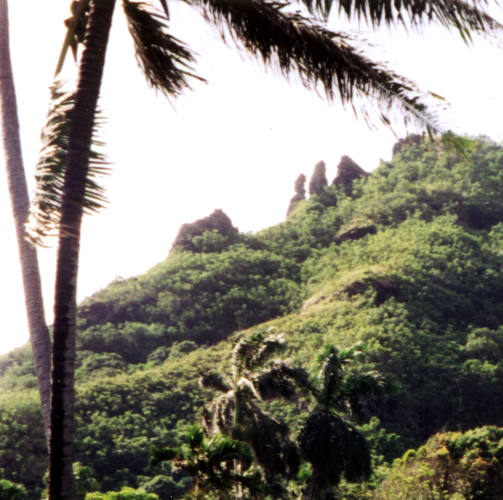 Moai on the Mountain

That's what I originally called this sight on Kauai's north shore, but it turns out there's actually a Hawaiian story about these rocks.   Apparently they're named for two of the four Piliwale sisters, a semi-supernatural foursome with persistent, insatiable hunger, who could only travel at night, because daylight would turn them to stone.  These four would constantly bother people for food.  So a clever chief held a banquet for two of the Piliwale sisters on this hillside, providing so much food and 'awa that the sisters forgot to seek shelter when the sun rose in the morning.  So they froze to stone here on this mountain, remaining as a warning to their two other sisters.  Why are there three stones?  Beats me - ask the Hawaiians.