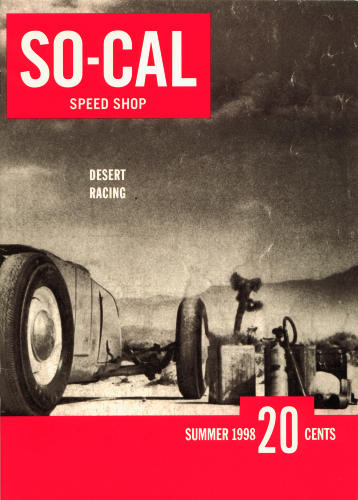 Great eye for detail in this catalog cover, styled with old Hot Rod or Life magazine type of graphics.  I like the simple, bold graphics style here, which holds up pretty well today.  It even looks like they went for the extra touch of including "wear and tear" marks on the cover like you would see on some old rag that's been manhandled over the years.  The current incarnation of the So-Cal Speed Shop has only been around since 1997, but its history goes back to 1946 when the first one was opened in Burbank by Alex Xydias.  Over the years the shop won a name for itself, as some of the fastest cars around were running under the So-Cal banner, like the bellytank lakester that hit 136 mph in 1948.  By the late 50s, changes in the hot rodding community led to hard times for a small shop like So-Cal, and Alex eventually closed the shop in 1961.  In the 90s, Pete Chapouris (formerly of Pete and Jake's Hot Rod Parts) undertook a restoration of the So-Cal bellytanker.   Although Alex retired in 1987, he worked with Pete to ultimately reopen the So-Cal speed shop in 1997.  Check out their website for more info about what goes on there today and what's in their catalog.