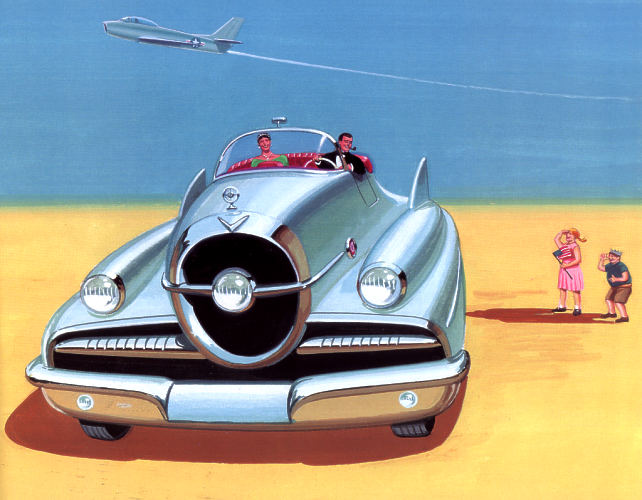 The accompanying text that went with this image reads, "If the Korean Conflict is all but forgotten today, where does that leave the Silver Sabre?  Commemorating a stalemated U.N. police action on the Korean Peninsula with a civilian American dream car was possibly a case of patriotic fervor winning out over commercial appeal.  The single-seat Silver Sabre, with its jet-fighter styling, aircraft-type cockpit, simulated aerodynamics, and a gunsight-type hood ornament that flipped up to reveal a cigarette lighter, did make a dramatic sight.  But its day in the sun proved to be cloudy, with early showers.  After negative response at auto shows - perhaps influenced by the clever but misguided stagecraft that had it rolling over a battalion of stuntment dressed as Chinese soldiers every hour on the hour - the Sabre was loaned to the U.S. Air Force as a recruiting tool, then went into mothballs when nine out of ten would-be recruits declined their free drives and joined the navy.  Its final chapter proved to be its noblest: purchased by the CIA at a tag sale, it was mailed to North Korea with no return address in 1959 as an experiment in psychological warfare."

OK, by the end there you probably started to suspect that this is a gag.  The image and the accompanying text are both from a hilarious, and amazingly well-crafted book by Bruce McCall called The Last Dream-O-Rama, the cars Detroit forgot to build 1950-1960.  Riffing on the kinds of funny legends that ACTUALLY TOOK PLACE with real motor city cars in that era of heightened automotive design experimentation, McCall put together a collection of "car concepts" and accompanying legends for this book.  With everything from the glamour shots like the sketch above, to the stories and the names, each entry is really fantastic and funny!   One of my favorite surprise book discoveries this year!