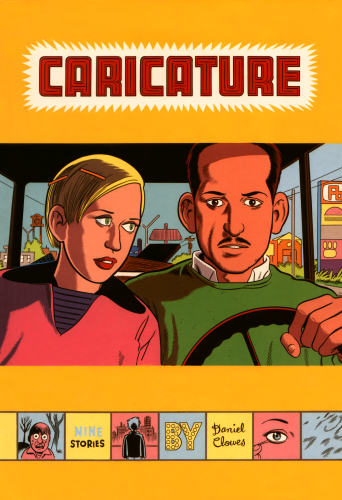 Daniel Clowes is amazing.  If you haven't heard about him, you will, especially considering that the movie version of his Ghost World novelette will be released this month in the U.S.  As a "comic artist"/"graphic novelist" or whatever label you wanna give him, he combines an incredible skill for writing stories and illustrating them in a way that casts his characters in a light that is simultaneously brutally harsh, yet somehow oddly sympathetic despite the bitter flavor.  It's amazing to see him getting some broad attention and praise, along with bucketfuls of awards from peers in the growing literary comix scene.  Read more about him on Salon.com, get more details from his publisher Fantagraphics' site, see interviews at Bunnyhop and Addict.com, see more of his work here, well you get the idea.  He also had an exhibit of art at the Seattle-based Roq La Rue gallery in May.  The cover above is from a hardback collection of 9 stories Clowes wrote for his solo comic Eightball.  Indeed some people are turned off by the fact that his stories are sometimes explicit, and quite vicious too, but somehow the guy's stuff resonates with me.

Bonus pics!  For the full cinerama version of the image from the hardback sleeve above, see the illo below.  Also, since the story "Caricature" originally appeared in Eightball #15, and was also the cover subject for that issue, check out the alternate cover below. 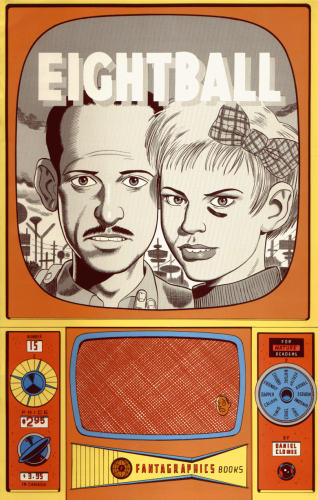