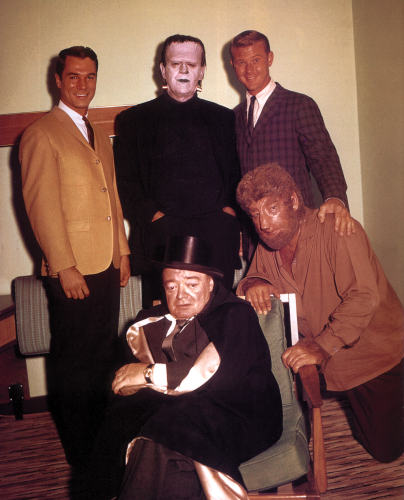 In the hackneyed television tradition of doing "a very special episode" with washed up big screen actors showing up for a small screen guest appearance, Route 66 did a Halloween show in '62 which must've been actually pretty fun to see.  In the photo above, we see Route 66 regulars Martin Milner and George Maharis (Buzz and Todd) with Boris Karloff, Peter Lorre, and Lon Chaney Jr.   These three star as themselves in a plotline that kinda resembles the reality they were experiencing at the time.  The story goes that the three monster men get together to do a new scare flick, but get in a debate over whether the genre still goes over with  audiences.  So they open up the old bag of tricks to see if they can spook anybody in regular, real-life settings (giving Chaney the opportunity to re-create his Wolf Man, Hunchback and Mummy monsters).  Hijinks ensue.  The monster make-up for this episode was done by ace veteran Maurice Seiderman, who's also known for doing Orson Welles' aging process in Citizen Kane.