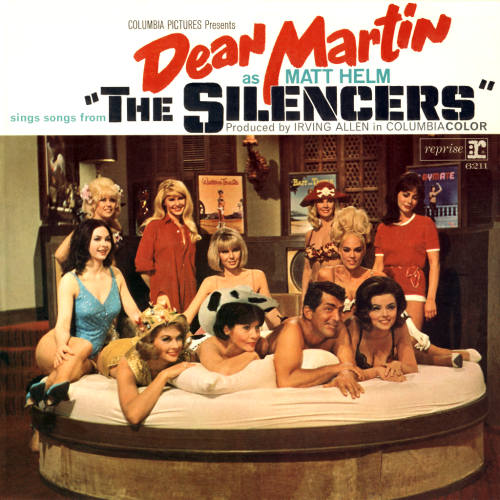 Dean Martin as Matt Helm sings songs from The Silencers

"Dean Martin, in his neat role as super secret agent Matt Helm - sophisticate of the world, gutty guy, virile adventurer, devil with the dollies...  in The Silencers, Martin plays no poor man's secret agent.   Martin secret agents right: dressed up snappy by Sy Devore... chased by nasty Chinese bandits... surrounded by kiss-n-kill cuties... ambushed in motel rooms with supine Slaygirls... every girl he meets makes Apassionata Von Climax look like one runt kid."  Thus go the liner notes on the back of this LP from the 1966 movie.   Also stars Stella Stevens whose other credits include the Elvis flick Girls! Girls! Girls!, The Courtship of Eddie's Father, The Poseidon Adventure, and many others.   The Matt Helm movies were about as silly as it got for secret agent comedies, with characters like "Lovey Kravezit" in this one.  Not much of the swingin' crime jazz kinda music on this LP - mostly suave crooning from Dean.  But a great cover shot showing Matt clearly at the Helm.