Record Of The Month - October 99 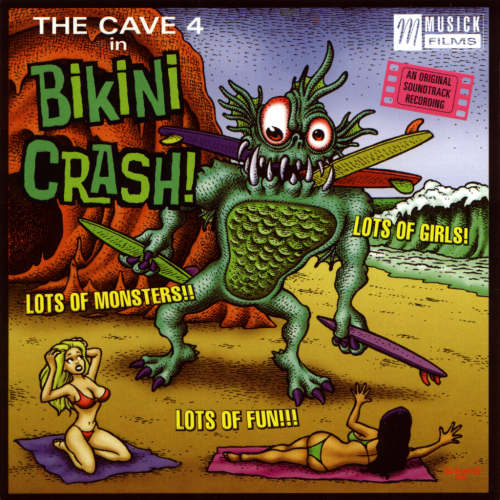 The Cave 4 in Bikini Crash! CD

This disc is just the greatest.  Loads of surf style and garage attitude from the Cave 4, a combo outta Germany with a gal bass player.  Mostly surf instros, with a couple vocal numbers tossed in for kicks, sorta like the formula (if you wanna call it that) that other bands like the Bomboras or Sir Bald Diddley do on their albums.  This was actually recorded back in 94-96, but the Cave 4 are still playing around in Europe.  They've got a great tuff guitar sound that captures the surfy feeling while being unique and non-trad.  Maybe a good comparison would be the Apemen or Looney Tunes - two other outstanding current Euro surf combos.  A bunch of the surf instros are covers of lesser known 60s tunes like Shockwave, Malibu Run, and Unknown.  They also do a cover of Surfin' Cat, which I remember from the the Surf Trio's first album - the lyrics tell one of those surfer-meets-his-end-in-the-waves stories.  Great campy monster cover from Glack, aka Steve Blickenstaff.