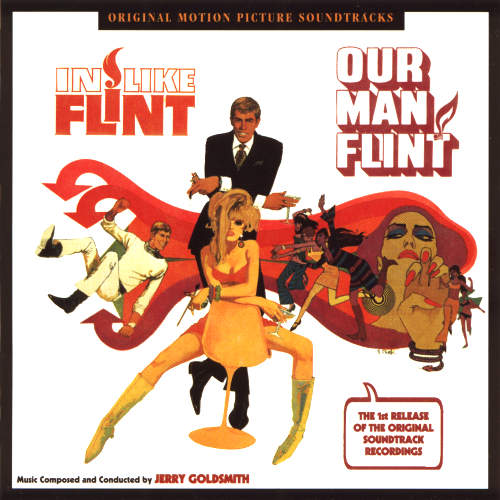 Man was I thrilled to see this cd.  I've heard rumors about a rare soundtrack LP from one of these two flicks, but this disc says "1st release", so maybe that was just a legend.  James Coburn is Derek Flint in both of these fine films ("In" from 67, "Our" from 66).   They spoof the spy craze by doing over-the-top American versions of all the cliches of the genre.  Both movies have the oddball conspiratorial international villains, the hero who's mastered everything from communicating with aquatic life to overpowing harems of women with pure charm, and of course, great swinging soundtracks. The composer Jerry Goldsmith also wrote scores for early episodes of The Man From U.N.C.L.E., and he's well-known for many other innovative scores like the soundtrack to Planet of The Apes.  There's 28 tunes on this disc, and it's outstanding all the way thru - definitely on a par with the best early Bond soundtracks, often with a staccato percussion or guitar sound common to other crime jazz and spy music.  The music isn't quite as brash as some of the John Barry scores, but actually that's just part of how this succeeds as a mirror of the uniqueness of the Flint character.  At one point in "Our Man" the soundtrack breaks into this big twist number, which could only happen in a Flint movie.  Zowie!