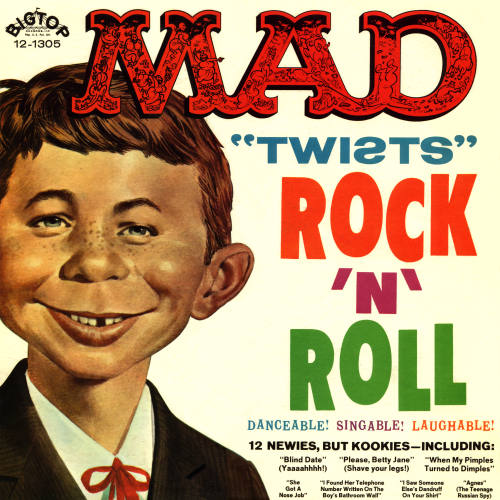 Probably one of my favorite comedy albums, this is one of those records that'll make me laugh out loud every time.  Part of what's so great about this one is that they went the full nine yards with the music - lots of authentic rock 'n roll style on here, with the unique MAD-style lyrical treatment.   Some of the tunes are direct takeoffs of specific songs, and others are entirely original while still matching the sound they're lampooning, like on "Let's Do the Pretzel" and "She Got a Nose Job."  The material on this LP was actually written and produced independently by Norm Blagman and Sam Bobrick, who then received an enthusiastic response when they showed it to MAD.  MAD subsequently helped them get this released on Bigtop in 1962, followed by a similar LP in 63 called "Fink Along With MAD."  There are a handful of other recordings that have been released over the years either as MAD magazine productions, or at least with the endorsement of the publisher.  Rhino did a CD reissue collecting MAD comedy material, which is nice but also sorta disappointing because it's so short (barely scratching the surface with just a lousy 12 tracks, only one of which comes from "Mad Twists").