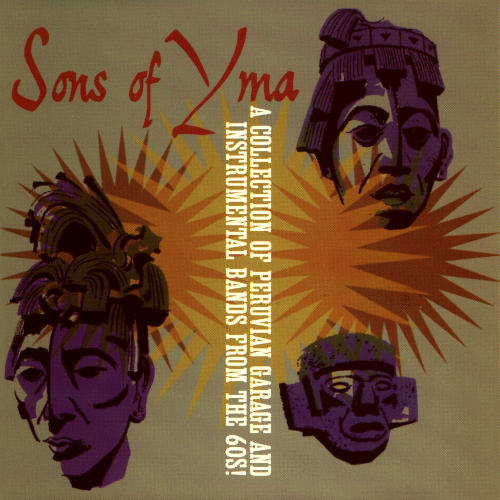 Within the first few seconds of the first song on the inaugural play of this spinner, I knew I was gonna love it!  As the subtitle plainly says, this is a collection of 6Ts garage and instro stuff from Peru!  'Sons of Yma' is referring of course to Yma Sumac, the multi-octaved exotica songbird whose legend placed her origin somewhere in South America like Peru.  Anyway, this ain't exotica.  That first song that floored me was a performance by Los Holys, an all-instro band.  The song's called Sueno Sicodelico, but it's really a spacey cover of the Sandals tune Scrambler from the Endless Summer soundtrack.  Don't worry when they say Sicodelico - this was before psychedelic became synonymous with endless wanking.   The guitar tone is sheer surf-style beauty in the ears of this beholder, right on a par with the sound Dave Myers got on his tune Gear.  Tone, baby, TONE!!  Also making an appearance are Los Shains, noteworthy for their spanish language version of the Novas' The Crusher on another collection.  They've got a tuff, reverb-popping surfy guitar sound that sounds great on their version of Apache 66 (yes it's true, that's a song covered WAY too many times, but this one's too solid to pass up), and a coupla good garage stomping vocal numbers.  There's a pic of Los Shains in the liners with a cherry red Farfisa combo compact.  Other acts include Los Belkings, Los Datsuns, Los Doltons, Los Golden Stars, Los Saicos, and Los Yorks.  Lots of stuff that sounds like a spanish speaking Trashmen, ? and the Mysterians, and the Kinks.  I also flipped over the Darts' version of I Need You, called Pregunto here.  Don't get me wrong - it's not all covers here, but it IS all good, especially if you like Teenage Shutdown type stuff.