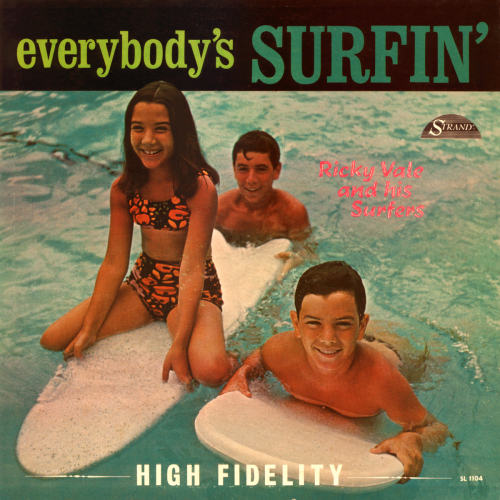 It's hard to imagine, but there was actually a time around '63 when surfing and surf music were a bigtime, mainstream teenage craze.   What's the modern-day counterpart - something like gangsta rap, "R&B" styled boy bands, or techno-tronica??!?  Does that mean these styles will be cultish retro niche genres in 30-40 years like surf is now?  Well anyway, back when the surf craze was big, there were plenty of examples of the first rule of hitmaking economics - "That which is popular shall be rehashed and ripped off to the point of total saturation."  Plenty of budget labels like Crown, Somerset, and Strand rose to the demand and galloped out with "surf" records, following a simple formula: (1) take a grab bag of whatever music is lying around the studio, (2 - optional) make up kooky surf titles for the songs, (3) find a surfing picture and slap it on the sleeve, and you're ready to go!  The funny thing is, being the early 60s and all, some of these hack productions actually contain great instro music, albeit a more generic twist sound as opposed to surf music.  Which finally brings me to the LP above.  Undoubtedly the family of a Strand Records producer, the "surfers" on the cover are named Dru, Mark, and Hal.  According to the hype on the back, Mark plays guitar along with some kid named Benjie.  No idea who Ricky Vale is.  The LP has fun, twist style guitar and sax romps with titles like Ghost Surfin', Surfin' Succotash, and White Cap Surfin', even bordering at times on a surfy sound!  To quote, "this is truly a fantastic bit of album artistry, combining a tremendous performance with outstanding material."