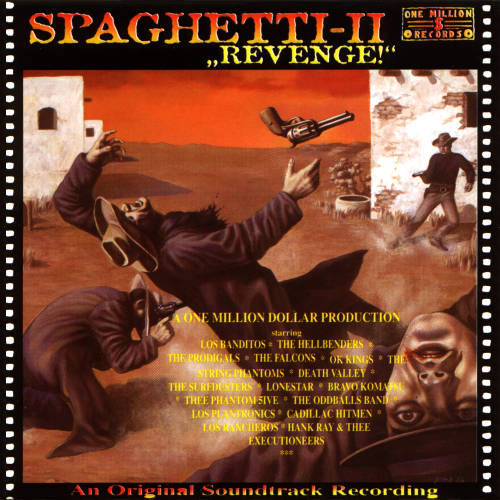 Here's the "sequel" to the great first collection put together by the German label One Million $ a couple years ago.  Of course the original Morricone spaghetti western soundtracks never get old to my ears, but these compilations are all new - not just another collection of the same old western soundtracks.  Like the first volume, this disc collects a fistful of original, mostly instrumental tunes done with the fierce guitar-based style familiar from the great Italian westerns.  There's a few tunes from current surf bands like the Prodigals, Surfdusters, and Thee Phantom 5ive, alongside a bunch of gems from combos known for other styles too.  It's pretty impressive how these bands capture the same kind of melody lines and tone as in the original flicks.  Coupla oddball tracks, but some real standouts too, like the Surfdusters' Lonely Spanish Hotel, and the twangy Desert Floor from the Cadillac Hitmen.